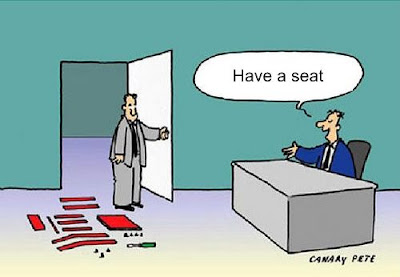 I interviewed at a Web development firm recently; it was a nice place. Very anti-corporate, which if you know anything about me, you know I dig that.

The interview itself was a ‘gang’ interview, with five separate personalities in the room (not including my own):

As it happens, the Observer was actually the Grand Poobah (Or Head Honcho, or Big Cheese, but I generally refrain from cliché in my posts. No. Really.), but he elected to remain quiet throughout the interview.

I really wish Zombies had been brought up first.

P.S.: If I had known I could pick *any* weapon (real or not) to fight zombies, then I would have probably picked the Disc Launcher from Tribes.  Just hearing that whirring noise brings back memories.  As it stands, I think the Double barreled Shotgun from Doom was a good choice. If these are 28-days-later zombies, you’re going to want something upclose and personal because that’s where the zombies are. 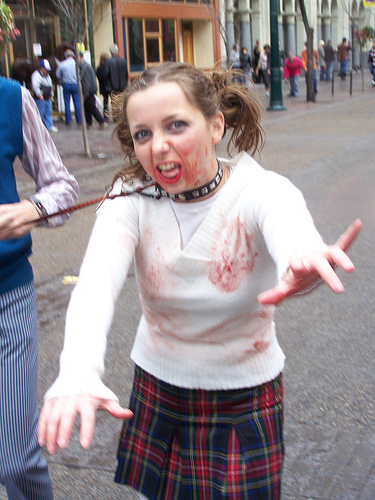 Anyway, back to the interview: The Alpha asked me about CSS Selectors.  CSS-what? Keep in mind, I’m implementing a new layout for Stack Blog (that will replace this blog’s current layout), I’ve implemented stylesheets for my work on St. Anns, and I tweaked an already existing layout for Big Spring.  Most recently (read: last week) I created the CSS For the Project dashboard.

The question specifically was, “What are CSS Selectors?” My (stupid) answer? I don’t know. Or at least, I thought I didn’t. I’d heard the word, but wasn’t about to BS an answer.

Turns out I use them all the time, I just didn’t know what they were called.

If you’ve ever seen this:

then you’ve used CSS selectors. That thing up top, before the curly braces? That’s an ‘id’; specifically a div id named ‘main’. And it’s a selector.  ‘Selector’ is just a fancy word for ‘that which I will apply the style to‘.*  You can apply them to divs, html elements, and just about anything you want. You can even apply them to specific lines inside of Paragragh tags.

I learned an important lesson from that interview: Know your terminology. I’d been using selectors for years, but had never realized that’s what they were called.

*That’s only a smidgen of what’s really out there for Selectors.  Glancing through the list on this page, there are some formats I’ve used, and others I haven’t.  Of course, I’m not telling the full story, there is more to selectors than that. If you’re interested, this site goes through the nitty-gritty of CSS selectors.

Warning signs in a software project rarely are found in code first. Just about the time you unpack your cubicle and get your development environment up and running, you will already have received warning signs about the application. Here’s what to listen for:

These phrases center around a theme: The code is really hard to grok and it’s chock full of dependencies.

If you’ve worked in with enough legacy codebases, you’ve probably gotten used to that.  Get un-used to it. It’s wrong.  Code is only as complex as you make it. As Ernest Hemingway has taught us, you don’t need to use big words to tell a story.

Your code is not an exception to this rule.

Before you cast aside what I’m saying, think about it this way: If a human can communicate using nothing but the most basic language, and communicate effectively, then why can’t the same thing be done in code? Why is that the exception?

I encountered this CAPTCHA recently. Insert your own joke here. 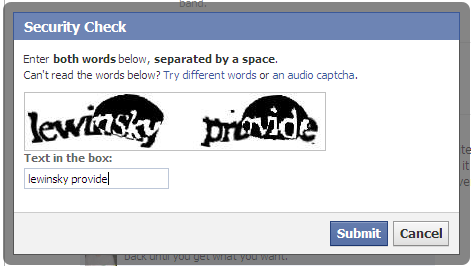 Going through that install process gives me a taste of the cruel world DBAs live in. I feel bad for those guys. No wonder they’re frazzled and grumpy.

I went to the SMSSE download page and was informed after downloading the program that I need to go to the Windows Installer 4.5 page and install the installer so that I could run the SQL Server Installer. My head hurts.

After reading tea leaves and conjuring up spirits with the Ouija board, I figured out how to install the Windows Installer.  At this point my morning took a turn. After dutifully restarting my computer, I ran the SMSSE installation process to have it tell me that my computer needed to be restarted before I could install SQL Server 2008.  It didn’t matter how many times I restarted my PC, it still failed to install.  I summed it up in a Twitter Post:

After searching the internet, I found the answer in a Microsoft Support Forum:

In my case, it did and I was able to install SMSSE, just with a little less hair. 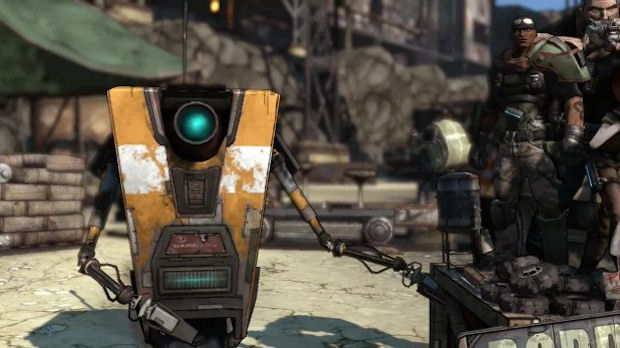 I was enjoying downtime this weekend after a few weeks of pretty intense work and sat down to play Borderlands, and having beat the game, I was just starting my second playthrough.  Claptrap came over the radio and told me that ‘Chef Sanders’ had more missions for me in the Arid Badlands.

Have you ever tried to google for ‘Chef Sanders Arid Badlands Borderlands’? Go ahead, try.  I didn’t get many hits either.  It turns out our little mechanical friend is actually saying Shep Sanders.

Here’s where Shep Sanders is located: 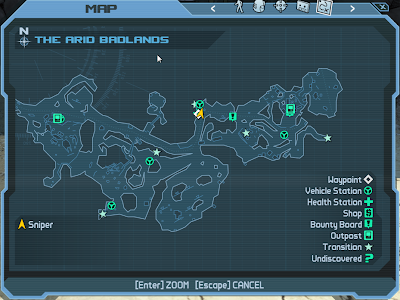