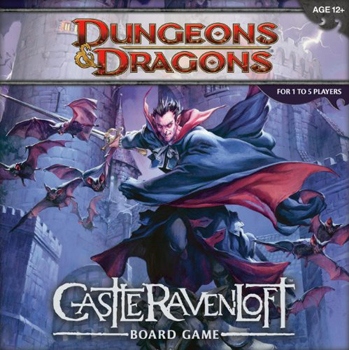 I think Wizards of the Coast heard my plight, because last September they came out with Castle Ravenloft, a Dungeons and Dragons boardgame.

It may be a boardgame, but Monopoly it is not.  Ravenloft lets you and four of your closest friends brave the corridors of castle ravenloft in 13 separate adventures, each unique and harder than the last.  The mechanics of D & D are there, but greatly simplified. Gone are character creation, the dungeon master, and the plethora of dice that frequents D&D, and in their place are characters with various pick-and-choose powers, each player controlling monsters they spawn, and a single d20.

Its greatest strength is that it allows 5 newcomers to Dungeons and Dragons experience the essence of D&D without the (sometimes boring) overhead that goes with it.  It’s D&D for people that don’t have the 4+ hours for a campaign.  Its greatest weakness is that it is unfinished in some areas, and has the possibility of ambiguity when confronted with some adventures.

I was able to sit down two people that didn’t even know what D&D was and a little over an hour later, they were begging to play another adventure.  During Thanksgiving break, I introduced it to my family, and they loved it, from my 17 year old brother to my mother.

I’m not alone in my assessment. Gabriel from Penny Arcade writes about his first experience with Castle Ravenloft:

Now you can take a table of people who have never rolled a D20 and have them playing an authentic feeling D&D adventure in the time it would take you to teach them Pandemic. There is no dungeon master required and no complex multi paged character sheets to try and learn. You decide who you want to be and then you are tossed in a dungeon and it’s time to start adventuring. The game does an incredible job of condensing the D&D experience into something you can just pick up and play.

If you’re looking for a co-operative boardgame for your next family visit, look no further than Castle Ravenloft.