After reading my previous posts about resigning, finding a home, and doing what I love, you might have thought I’d been thinking about a job change. You’d be right.

For the past year I’ve been a Team Lead on a large software project, employed by a government contractor.  The project itself was an N-Tiered .NET Winforms solution in C# 2.0. I had originally taken the position because the cost of living in NoVA was that much different than in NC that telecommuting to a job in NC just wouldn’t work financially.  Protip: Never take a job for the money. After spending a year there and having all my personal projects being web projects (ASP.NET MVC), I realized that I wasn’t really happy not developing software day in and day out.  As a Team Lead, a lot more time is spent supervising or code reviewing, or planning the next iteration, or meeting with the customer.  On a good week, I got to spend 50% of my time working on a software issue, on a bad week, it was 0%.

Something had to give.

So I started to look on the Stack Overflow Job boards.  The reasoning being, if I’m going to find another job, I’m going to find a place that I can call home. Somewhere that scores high on the Joel Test, and somewhere where I want to stay. As if serendipity were looking down on me,  I found a job posting for the Motley fool.  Immediately the words “Blue Wizard needs Food badly” jumped out at me. These people spoke my language. It’s as if a million geeks cried out for joy all at once, and were not silenced.  So I excitedly put together a killer cover letter and my resume and sent it off to them.

An online skills assessment test, two phone screens, and a full day interview later, I was exhausted, nervous and hoping I didn’t blow it.

Fast forward to three weeks later, to accepting an offer and finding this in my mail: 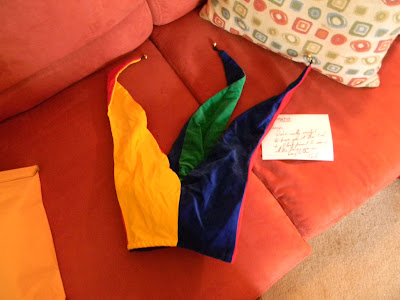 Since everyone’s doing the 3D thing, here’s a better view: 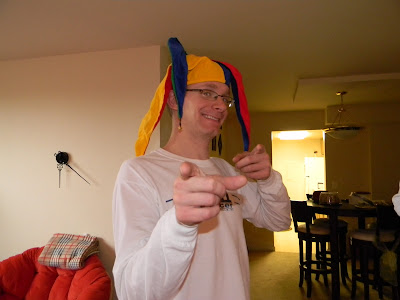 If that silly picture of me wearing a jester’s cap doesn’t clue you in, let me spell it out for you: I’m now a Fool.  I’ll be working on the software that powers some of the Motley Fool’s online offerings.  I get to play with ASP.NET MVC, C#, and work with a whole bunch of smart and passionate software developers. What more could a guy ask for?

Here’s to finding a home.