The following image about programmer productivity is making its rounds on the internet: 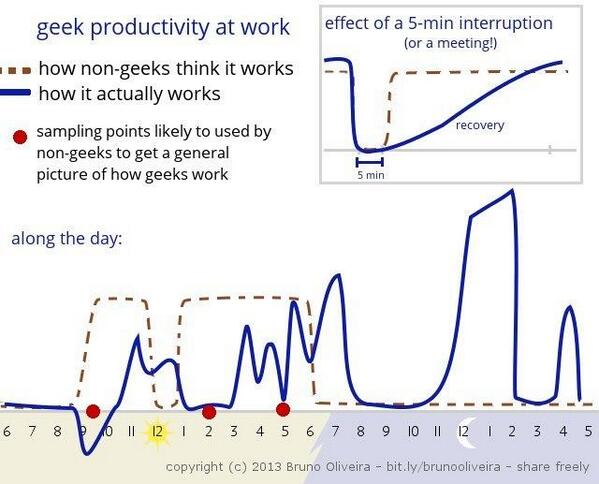 As Homer Simpson might say, it’s funny because it’s true.
I haven’t figured out the secret to being productive yet, largely because I have never been consistently productive. Ever. Joel Spolsky talks about this in one of his blog posts:

Sometimes I just can’t get anything done.
Sure, I come into the office, putter around, check my email every ten seconds, read the web, even do a few brainless tasks like paying the American Express bill. But getting back into the flow of writing code just doesn’t happen.
These bouts of unproductiveness usually last for a day or two. But there have been times in my career as a developer when I went for weeks at a time without being able to get anything done. As they say, I’m not in flow. I’m not in the zone. I’m not anywhere.

I’ve read that blog post about half a dozen times now, and It still shocks me that someone who we see as an icon in the programmer community has a problem getting started.
I’m glad I’m not alone.
I’m not here to share any secret methods to being productive, but I can tell you what has kept me from being productive:

Things that have contributed to making me productive in the past:

It’s telling that half of the things that keep me from being productive are problems I’ve created; but some of them aren’t. Like Open Office floor plans.
Ultimately, each of us controls what makes us unproductive. I suck at peaceful confrontation. I either come of too strongly, or I sit there and let the other person walk all over me. I’m really not good at it at all. As such, I don’t have any good advice for handling the external forces that contribute to not being productive, but I do know this: Whatever I can control, I should control. That means:

What makes you unproductive, and what do you do to combat it?
Discuss this post on Hacker News or Reddit.
Edited on 9 July 2014 for typographical errors.

130 thoughts on “How to destroy Programmer Productivity”