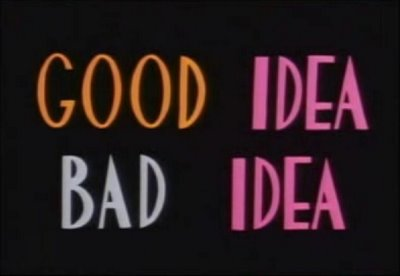 When I let the cat out of the bag Wednesday, I took a chance that someone else who reads by blog (all two of you) wouldn’t have the same idea and beat me to the punch. I then further took a chance by telling the meta.stackoverflow.com crowd about my work with Markdown.

Good Idea: Being public about your intentions.

Bad Idea: Being public about your intentions if you care about someone eating your lunch.

In this case, I don’t care if someone comes along and does the same thing, or even does it better. That’s a win/win. I get a blog engine and I’m not on the hook to maintain it, and I get a blog engine I want to use. I’m well aware of the frameworkitis that can make its way into developing a blog engine, and I hope to avoid that, if at all possible.

Also, I contacted the Department of Cliches Department and asked them if I could extend my cliche quota to five since it was friday, their response? Not a chance in hell.